Posts : 31
Join date : 2012-06-18
I might start as everyone going on a vacation to location X (say... Thailand), then something crazy happens and all the characters (fern, Vanity, Hillary, even the QQ) get back to gather to solve some international mystery/conspiracy. It would most likely end alone the lines of the Oz arc. 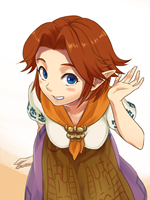 BraePat wrote:I might start as everyone going on a vacation to location X (say... Thailand), then something crazy happens and all the characters (fern, Vanity, Hillary, even the QQ) get back to gather to solve some international mystery/conspiracy. It would most likely end alone the lines of the Oz arc.

DragonKingZero wrote:Hypothetically speaking, if could write or submit a story arc for SA - anything at all, whether it's major or filler - what would it be?

1. Buying a rare Cray supercomputer (or a bunch of ZX Spectrums)) because it was 1$ on EBay (utilization costs millions, so why spend them?)
2. PIP! We can't place it anywhere and we can't put it in basement unless if we break it apart!
3. Scarlet - as a child, not as a lab genius - finds Cray to be a good source for new nice jewelery. SELL-SELL-SELL

Hanii Puppy wrote:Kat: "Piiiiiiiiiiiip why is there a dead human in our house Pip?
Pip: "Oh, hey, how did he get here?"
Kat: "Piiiiiiip What did you do?"
Pip: "Me? I didn't do this!"
Kat: "Explain what happened, Pip!"

Posts : 134
Join date : 2012-09-28
Age : 31
Location : I don't see why I should tell you.
I actually had an idea based on speculation during the time machine fiasco (specifically after Scarlet mentioned something being pulled forward through time). Basically it revolves around Hillary's kid self being yanked out of the past and ending up in the present, and the gang's effort to find a way to get her back to her own time safely (made more difficult by Kat's constant temptation to "punish" her for her older self's actions).

1. Pip sees a collection of nice anime image and asks "What anime they are from?" (and gets a ton of irritated shouts: "THEY ARE FROM "ORI' B-RINTS"!!!)
2. Pip tries the game ("is that some kind of jRPG? No, it says 'bullet hell'...") and gets shocked, how rough original characters are.
3. Pip throw the game away.

Posts : 196
Join date : 2010-06-13
Age : 37
Location : Houston Texas
How would it begin?
Thw Quads push Pip into letting them join him on his Lorecraft adventuring as they are bored and the 'real' outside world scares them. However nothing as simple as they tweak with his game after watching him play on a 'boring' computer and thus create some sort of full immersion virtual reality.
How would you have it play out?
A series of awed Pip moments tainted by Pip being Pip, followed by the usual pratfalls, and The girls just turning the game on it's side as they take programs apart and then put them back together 'enhanced'. Imagine the quad feels bad that the insects Pip killed to rank up are being "ouchied" so they make them better, ending up with something similar to the mega beetle on muto juice. The Quads may even hack in fancy laser weapons "because a game without them is just stuupid" and begin running a muck as Pip desperately tries to hold onto his pure Lorecraft experience.
How would you want it to end?
One Idea: PCs are complaining or the bugs the Quads make crash the game, But the developers step in, as OP Avatars of Mod. Despite everything, Pip comes to their rescue and as penance the girls return everything back to normal.
The Other: Pip begins to use the quads and their naivete to help him clear places he could not before, only to as he finishes the big boss and claim his ultimate prize, A rather familiar and pretty figure appears. Fern catches Pip after all this time he has ignored her, and there he has four squirrel girls virtually all over him in celebration as they are praised by him, like little kids who have been praised by a beloved uncle or something.. Before Pip can explain anything Fern leaves in a slightly sad cliffhanger. But after the Hillary bollocking he just got I don't like that idea much.

DragonKingZero wrote:Hypothetically speaking, if could write or submit a story arc for SA - anything at all, whether it's major or filler - what would it be?

Here is an idea that I had in mind:
One day Art discovers that he has a long lost twin brother; A millionaire named Pat (Short for Patrick, just like Art is short for Arthur... I think) from L.A., California who is into writing videogame plotlines (How he got rich, he’s just famous in the U.S. though) just as mush as Art is into drawing videogame designs.

They are completely alike... almost.
Art is into DC Comics.
Pat is into Marvel.
Art (I think from that Fat Art arc) is almost a couch potato.
Pat is quite Athletic.
Art is afraid of the Experiments that Scarlet and her friends get up to (Wouldn't you if you were there during the giant bug incident?).
Pat, however enjoys the fact that they do so and even helps them whenever the Denizens are busy (I could imagine Pip saying that he's a mad scientist).
He and Art do make a good team though.

Here's how I would put it.

How would it begin?: Kat receives a letter from Vanity, asking her (Kat) to join her (Vanity) to an End of Summer festival at Los Angeles, California, which includes an Artists competition; first place gets the opportunity of being the lead artist in an upcoming videogame variation of The Realm of Lorcraft by Sag (Saga, the videogame company that Art said he was a "diehard fan" of). Kat tell him about the contest... in a split-second later (literally), he is seen packing his, Pip's, and Kat's, Luggage like there was no tomorrow. He even made a briefcase for Scarlet and here think tank friends (Kat and Pip agreed that they couldn't be trusted on their own... unlike the Denizens with their TV).

How would you have it play out?: The Festival also has a writers contest for the same Lorcraft game, the prize to be the storywriter for the game. A man known as "Pat" is seen (not his face though) entering the contest. Later in the story, Art and Pat crash into each other. When they each stand up to face each other... Pat's face is finally shown...

How would you want it to end?: Pip finds Pat's Adoption papers online as well as his and Art's birth certificates and they all find out that Pat and art... are... Twins.