Collected Curios » Other » Artwork » Drawings of Pietja The Unskilled

Drawings of Pietja The Unskilled

Posts : 1008
Join date : 2010-02-01
Age : 27
Location : Beaufort, South Carolina
Strangely I like the first comic fan-art facial expressions better than the second one. and is it just me (not an insult btw) but dose Scarlet's ears look like Bugs Bunny's ears?

Either that or it's perspective?

btw., Cenaris, that Juggernaut's arm on your avatar looks like a man thing at first brief glance. And Magneto looks at it with this sort of wicked smile...

Pietja wrote:Tiny legs. It's a caricature of my friend's father called Anthony.

btw., Cenaris, that Juggernaut's arm on your avatar looks like a man thing at first brief glance. And Magneto looks at it with this sort of wicked smile...

Well they don't call him the "Master of magnet" for nothing

Posts : 992
Join date : 2009-11-03
Location : right before my laptop screen
Well I always knew that Magneto had something in common with Xavier... but Jeggernaut?

At least he picks from one family, doesn't he?

No shading. Too lazy

Kiva (Megas XLR) and Noodle (Gorillaz) if anyone asked.

Ok., I really have no ideas and during next week I'll be home alone so... I guess I could draw something for other people.

Give me propositions on P.M. if you want to and maybe I'll draw something for ya.

Ok., I really have no ideas and during next week I'll be home alone so... I guess I could draw something for other people.

Give me propositions on P.M. if you want to and maybe I'll draw something for ya.

No shading. Too lazy

And I'm pretty sure that's an overstatement.

But thankyee kindly for a positive response.

Censored, but what the fekk, some people still can go bonkers because of topics like these... it's banned in UK as far as I know (a silent cry crossed the air)) and if it wasn't censored moral police would smash your house front doors and would like to put you on a electric chair.

I fukken suck at coloring...

Just wanted to point this out, but, the monkey looks just like the kid from Jumanji. :3

A continuation of the strip above, and for this one to make sense, you have to read the first one.

(Clicking the picture redirects to bigger one on my DA):

As a non-native english speaker I have a favor to ask for all of you naturally imbedded to it. If you see some serious grammar, spelling bugs, please let me know.

It is appropriate to say "Ive never ate them..." if it is a bit more formal. Like she has heard of them or seen them, but never eaten them.

Third & fourth strips are on their way - sketches are done, I'll have to get some sleep (as it's 2:10 in the morning where I am) and then I'll play around with lineart, coloring and shading. And thinking about whipping out the proper dialogs.

Anyway, I felt a little tired because of the heat and the constant drawing, so I looked out of the window at the chestnut tree that is growing behind it. There's a story tied to it wich I turned into a short... hm. Poem? I could say that.

One night I saw
a shape somehow quaint,
circling around
an old chestnut tree
but light of the moon
was too dim and faint
for my weary eyes
to notice and see
A figure of grief
that shape has assumed,
bent over phantoms
lying around,
moving in motion
of someone that's doomed,
It kneeled on the ground
to wich It was bound

Under that tree
many people have died,
long time before
it was four storeys high
Falling on dirt
they've nourished the soil,
seeds drank the blood
of innocents toil
Warmongers left
in hasty retreat,
running away from
upcoming heat
Flesh has dissolved
and memories fade,
all that has left
is this weeping shade
Circling around
this old chestnut tree,
in hope that someday
his soul could be free.
Please remember that english is not my first language, so there might be some errors & undesired sillines, but I've tried to avoid it at any cost.

So, yeah, basicly there's a chestnut tree that reaches my apartament floor and gives a pleasant shade in hot and sunny days like the one that has just passed. And even farther there's a playground for kids, since a middle and elementary school are also nearby. When I moved in I heard a story about that place from an old fellow that lives in the same flat as I, passed from his father who was in his thirties during World War II. He said that in these times there was no tree in this place (nor schools or playgrounds), only some kind of field where about 15 to 30-something civilians were shot dead by german nazi soldiers. And because after the war commies didn't allowed to mark this place as a field of mass massacre, some folk decided to plant chestnut there.
When USSR became past and Poland was free again, most of the folks that remembered that event were dead, so no one really cared about putting a plaque on that place. There were, probably, ideas about doing so, but I guess with no result.
And now, in the place of massacre there's a big chestnut tree, a playground and a two schools.
Quite eerie and poetic at the same time. 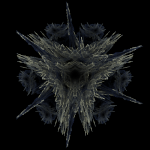 Re: Drawings of Pietja The Unskilled

Collected Curios » Other » Artwork » Drawings of Pietja The Unskilled