What is your favorite sketch?

If only for the reference. Haibane Renmei is highly underviewed. This must be remedied!

Guest
Hmm... I've actually never heard about it, what is it?

Posts : 13
Join date : 2010-01-23
Age : 40
Location : Home or Work...
It's about this girl who sort of 'hatches' out of a cocoon and finds herself in this strange town. She probably died somewhere else and was reborn here. We don't know for sure, but she has a vague sense of having another life. She's part of a group of beings called 'Haibane'. After they hatch, they sprout these little grey wings and are given a halo to guide them. The series follows the newest girl, whom they name Rakka, for the most part as she tries to find her way in this new world, to learn who she's meant to be and what her purpose is in this strange new place.

You can find the whole series on YouTube. There are parts that are seven levels of awkward, mostly because of Rakka's shy personality, but it's really a heartfelt movie. Makes you cry in a couple places, that's for sure.

Oh, come one - it's not like the DVDs wouldn't be going for dirt cheap these days...

np: Flight Of The Conchords - Carol Brown (I Told You I Was Freaky)

And, as in all anime, i recommend subbed to dubbed.

Guest
Aaah, I see. I'll check it out on YouTube then.

cammyjag wrote:And, as in all anime, i recommend subbed to dubbed.

See, that's the beauty of DVDs - you get an English dub that you can actually listen to AND subs you can easily choose not to activate.

German dubs, on the other hand... *shudder*

Also, there are culture nuances that are lost in the subbed versions, so it makes sense to a Western audience.

But I don't want to turn this thread into some anime translation debate. I have an unhealthy affinity for subtitling anyway, even if I'm watching it in English. Used to drive my college roommates crazy.

cammyjag wrote:Also, there are culture nuances that are lost in the subbed versions, so it makes sense to a Western audience.

Additionally, the dubbing company often has this wonderfully patronising attitue that says we poor westerners cannot understand Japanese culture, cusine, etc and that, therefore, they should make a flat-footed attempt to subsitute some western (preferrably American) artifact or behaviour for the Japanese one.

But, as you say, this is off-topic.

So... Who's up for Chloe to become Goodcat's on-off trophy girlfriend?

So... Who's up for Chloe to become Goodcat's on-off trophy girlfriend?

I can actually see that. Not that it has anything to do with my favoritism for the character (

) but I can imagine they might know each other even on a very basic level. Wonder if anyone will take note? Otherwise I'm gonna have to draw it.

cenaris wrote:... I'm gonna have to draw it.

It'll be a simple sketch of them, nothing naughty (in spite of Chloe's more libertine behaviour)

jollyjack wrote:They may appear in a pin-up together, but they're from 2 different universes.

Weeellllll, since when has that stopped anyone?

When it comes to fan activity, dimensional boundaries are so permiable that they are practically collanders!

For Art, I've gotta say I love the sketch of him facing apocalypse with the 3 others close by, holding up the pencil towards the sky with the most inspiring face on ever, kinds looks like it'd be a movie poster.

For Pip, definitely the "+32 Attack Bonus" Realm of Lorecraft one, or the one with him controlling the giant mecha.

For Kat, as much as I love the ones of her *ahem* "with" Scarlet (and for those few sketches, Chloe <3), I love the one of her offering up the 2nd controller.

More in a bit, heading out the door.

Chloe: Resist T-Shirt, easily, if that counts as a sketch. If not, then I'll choose the BIIIIG EYES one. I can imagine waking up to that at the foot of my bed <3 freaking ADORABLE! 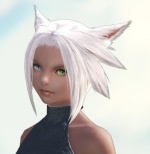 Pietja wrote:[MOD EDIT - Dodgy site] here it is, if the previous doesn't work.

It seems the website you linked to holds some of JollyJacks works, a few of which should'nt be there.

Somthing for JJ to look into, but I think one of his 'Apsara' are on there!

Re: What is your favorite sketch?