for those who don't know what it inclides, it is Pokemon. Yeah, Pokemon. You see, one man decided that the gameplay got stale after a while, so he decided to place restrictions upon himself and make comics about his adventures through Pokemon Ruby and post them. He originally posted on 4chan and got an enthusiastic response. So he continued to play and make comics.

Now here is where you come in. Fire up the ol' DS or download a ROM to emulate and pick your favourite Pokemon game!

1. Only catch the first Pokemon you encounter in each route/cave/whatever and nothing else. If you fail to catch it, too bad, continue onwards. Multiple levels of a cave (for example) are not new Routes unless it is a completely different part (Mt cornet north side/south side/spear pillar). Sea routes are fine.

2. If you Pokemon faints, consider it dead and release it.

That is right, you cannot choose what Pokemon you will get (except for first and any giveaways like Eevee in FireRed). You MUST release when they faint, you may take items off their "corpses".

This gaming method stuck an actual tune with me. I grabbed an Emerald ROM (as if I am going to grind on a DS) and am currently making my way through Emerald. The new Pokemon I am using (I would never chose a Wismur, Zigzagoon or a Taillow) are finding a new use. Their deaths are meaningful and I actually feel a slight sense of loss whenever I make a foolish mistake and they faint.

So I am going to be posting my little adventure here and I highly encourage others to do the same.

Posts : 306
Join date : 2010-06-11
Age : 31
Location : Darkside of the Moon
My adventure started with a Torchic named "Blaze" and we made our way through the stupid "Find Brendan" phase. Yes I chose the girl. No she is not May. I've played as a dude all the time, needed a change.

So after we got our pokeballs we made our way to our Dad. We grabbed a Zigzagoon named "Copper" and a Wurmple named "Toxin". I tried my best to get Toxin to fight, but he was a goddamn hippie and missed all the time. He was taken down by a well-aimed critical from a Poochyena. That thing was high and I knew he felt nothing.

Seeing how much of a bad-ass Poochyena was and how he was a bloodthirsty motherfucker, I grabbed him. I named him Shadow because hey, he's kinda like a black Dark wolf. He is cool. New route equalled a new Pokemon. I mentally noted that sending out a weak Pokemon to catch another Pokemon was a bad tactic.

Making our team a solid three we met up with my Dad, who is always busy and sent us to help this wimp grab a Ralts. Sucker didn't even know he grabbed a male. Probably thinks he will get lucky with a female Gardevoir and BAM, cock.

I made my way to the forest, picking up a cute little Marill I named Tsunami. Tsunami was a beast with her pound move. So much that she surpassed my best pokemon and got Water Gun. I took down the first gym easily (picking up a Wismur named "Bass" along the way. Along with a Taillow named "Icarus) making our team 6.

However during a battle with Brendan, his Slugma burned my Marill. I though she was going to be okay, but Mudkip landed a solid critical while I was using Rollout. The burns and the damage proved too much for my dear little Tsunami. My first real Pokemon lost. Bass cried her anguish in a powerful Uproar to take revenge upon Tsunami's killer.

I doubt that Mudkip will ever hear again.

Still, another rule that just adds to the experience is that you must nickname your Pokémon.

Sure, it's not an official rule, but it works.

I'm so tempted to do one myself now, after all this. Probably gonna do one for B/W. One game just for leisure, the other Nuzlocke :T.

Caught a Slugma, named it Gary because it was a slug that turned into a snail. Of course, a nice critical hit from a Machop made his training period short.

Watson was my next Gym leader, and we totally kicked asses and took names until we hit Mantric. Then with a fateful critical shockwave... Blaze the Combusken was down.

Bass was Also no match for it as another critical hit took another life.

Shadow, now my only true companion apart from Icarus, ripped Mantric's throat out. I didn't call him off.

This was a turning point in my training. Now, I will redouble my efforts in making sure that my partners will always be the best they can be. The loss of my first Pokemon has taught me that.

A Numel joined my party with a Electrike of my own. However he sucks, but Shockwave made him better. 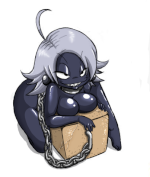 After getting the Pokeballs I head back up to route 103 and snag me a female wingull who I named Belldany ( I had decded to name all my pokemon after characters I liked) and went back to heal. After healing I walked over to route 102 picked up a Zigzagoon which was also a female and I named her Zig Zag

A Seviper took him down. I captured her and named her Silencia.

» [Joke challenge] Yo mamma is so fat...
» The Deloitte/FIDE Chess Rating Challenge
» A tickle challenge to a gatomon.
» Weekly Challenge
» RPers! Here is a challenge for you!