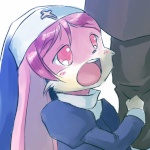 I think that he make me mad with this work.
I said "I don't want to see dead cat helicopter" again and again. This treatment is terrible.

Maybe some people will know, I deleted dA account.
and pixiv(Japanese art site) account too.
There are many his fanart i made them.

b3ta people play as a toy with innocent people/animals.
I had been mistaken for a fun time spent with them.
and I had been the participation of bullying between do not know.
I must be ashamed of it.
I had to be cut off to relation with them.

dA environment there were many conditions that cause the illusion of he is good person.

I can't support to people can play as a toy with dead real cat.
(some people said "your zombie nun is Desecration of the dead", I don't think so.
Because I don't real rabbit thing.
I must blame Japanese lolicon perv art if theory is correct.
However I don't blame them.
I hate that people blame fiction to be crime reason.)

I think that he hated me. (or Looking at me as a toy rather than a human)

and
I think he is there is no moral fiber.
Because he was hide message as spam important notice in dA.
that fact was Native American.
He wrote discrimination word to the title.
He did not apologize at that time.
I hate racist. I don't such he can explain.

I was going to draw a fan art of him again today.
I will never draw such thing... 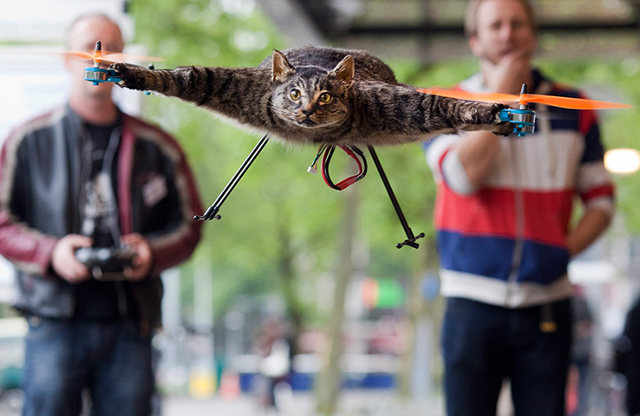 Quote:
You can find a lot of strange things on the internet, but this dead cat turned into a remote-control flying helicopter may be the strangest yet. 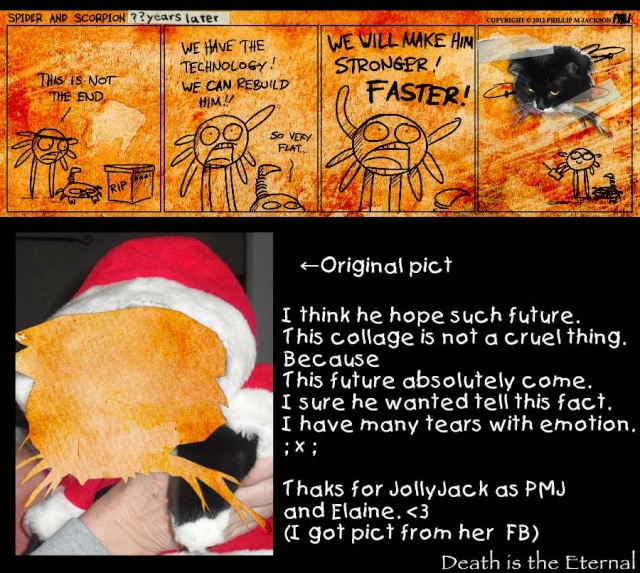 OK.
I interpret this as.

Admin
Posts : 478
Join date : 2009-11-03
OK.
I was tolerant of you up until now. I thought your supposed eccentricities were simply down to the difference in cultures and language.
I’m not banning you because you posted a picture of my mum’s cat.
I’m banning you because you think it’s OK to use a person’s family photos/names, tagged with the rather sinister words "death is eternal", in…..whatever it is you think you’re doing.

Get out and stay out.

Posts : 4
Join date : 2012-05-30
I think the guy who did it was crazy, yes. Am I going to stop using DA, and stop watching any Collected Curios? Hell no. I love DA and Collected Curios, and because a few Deviants post something, or Jollyjack makes one strip, doesn't mean they're making fun of dead cats, or redefining death. (Or whatever it is to you). They're making fun of a guy, who made his dead cat fly. And it's funny. :I That's all I have to say on the subject.

Now, as to the actual strip I found it hilarious. I wonder if that guy spoke those words as he attached the rotors, or began contemplating it! xD

He's since deactivated his account, presumably in protest of the fact that no-one agreed with him that 'squaw' (the Native American word for wife) was hate speech.

Posts : 395
Join date : 2009-11-11
Location : Duckburg, Calisota
To me, it's just taxidermy, only screwier than usual. Of course, I find taxidermy perturbing and a bit creepy, but that's just me. The reference to The Six Million Dollar Man actually kind of gives it a hopeful quality, as if to say, "The cat came back. She didn't want to roam. The very next day, it was home, sweet home."

Posts : 660
Join date : 2009-11-04
Sorry, It turned out the cat was actually dead and taxidermied. Oh sorry.
By the way, some people put their dead pets in taxidermy... and I have an old drawning of flying cats. Don't ask me where I got it.

CyberCorn Entropic wrote:To me, it's just taxidermy, only screwier than usual. Of course, I find taxidermy perturbing and a bit creepy, but that's just me. The reference to The Six Million Dollar Man actually kind of gives it a hopeful quality, as if to say, "The cat came back. She didn't want to roam. The very next day, it was home, sweet home."

Why am I suddenly reminded of a little diddy from my Boy Scout days?

He gave that orange cat to a man going up in a balloon
Told him to give it to the Man in the Moon
The balloon came down 90 miles away
What happened to the pilot, I dare not say


Unfortunately, much of the song has become mangled by faulty memory and age. There are several more verses, I just can't remember them all.

A brilliant, darkly funny and compelling animated video based on that song.

scienceguy8 wrote:Unfortunately, much of the song has become mangled by faulty memory and age. There are several more verses, I just can't remember them all.

There's several variations of the song (and, yes, good catch!).

This is the version I'm most familiar with.

Posts : 1008
Join date : 2010-02-01
Age : 29
Location : Beaufort, South Carolina
seargeant_Moggy I thought was a good artist. I loved most of her work. Its a shame all this nonsense had to happen.
I don't blame anyone here. Not seargeant_Moggy for overreacting, not Jolly Jack for well... I don't know. Jolly Jack solved a problem the best way Any Admin can.

I feel sorry for seargeant_Moggy, and I hope she doesn't give up on her art, or anything else, all because of 1 Nut that desecrated a Cat. (I have seen worse done...so)

Hope I will still see her work, somewhere in the future.

Re: I don't surpport new work.