Been working on this for a bit, just finished (I need to stop waiting until 9:30 to draw). My second real attempt at the tablet. It is Neelu (in case I messed it up beyond recognition like I did with the "New Pens" pic of Ryan. 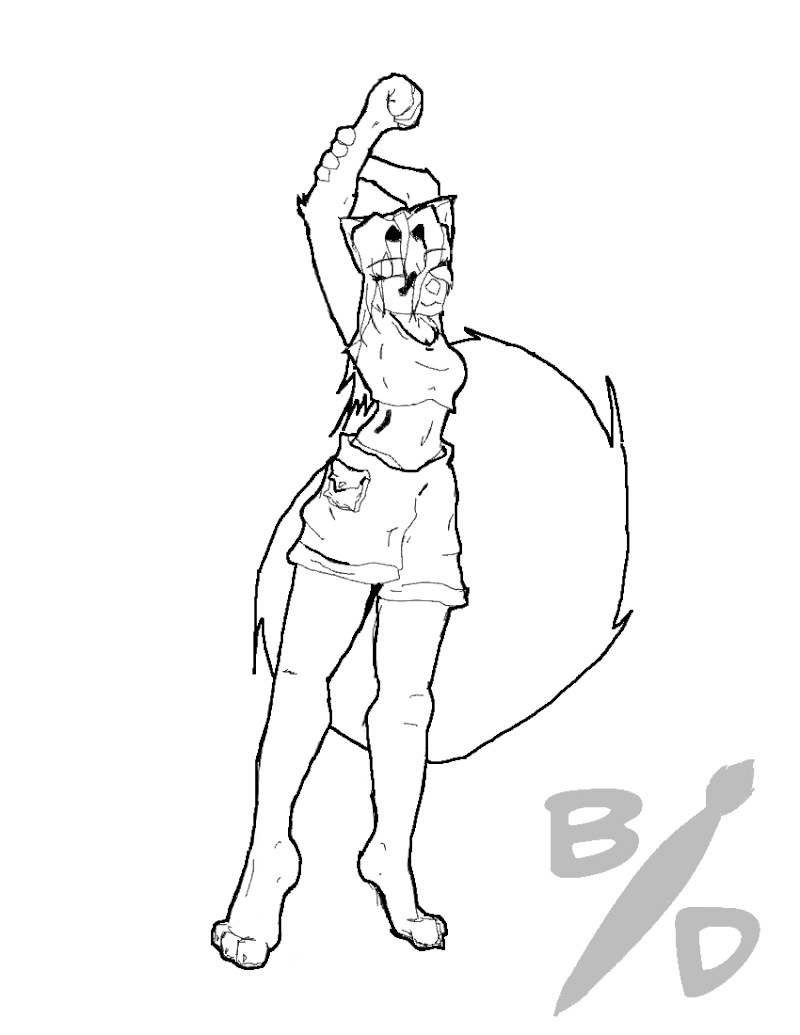 OH GOD!!!!!! Just remembered! Oh crap... that thing about the dirty pic of Ryan and Neelu was a Joke! Cant believe I forgot about that! crap!!! No such pic existed! 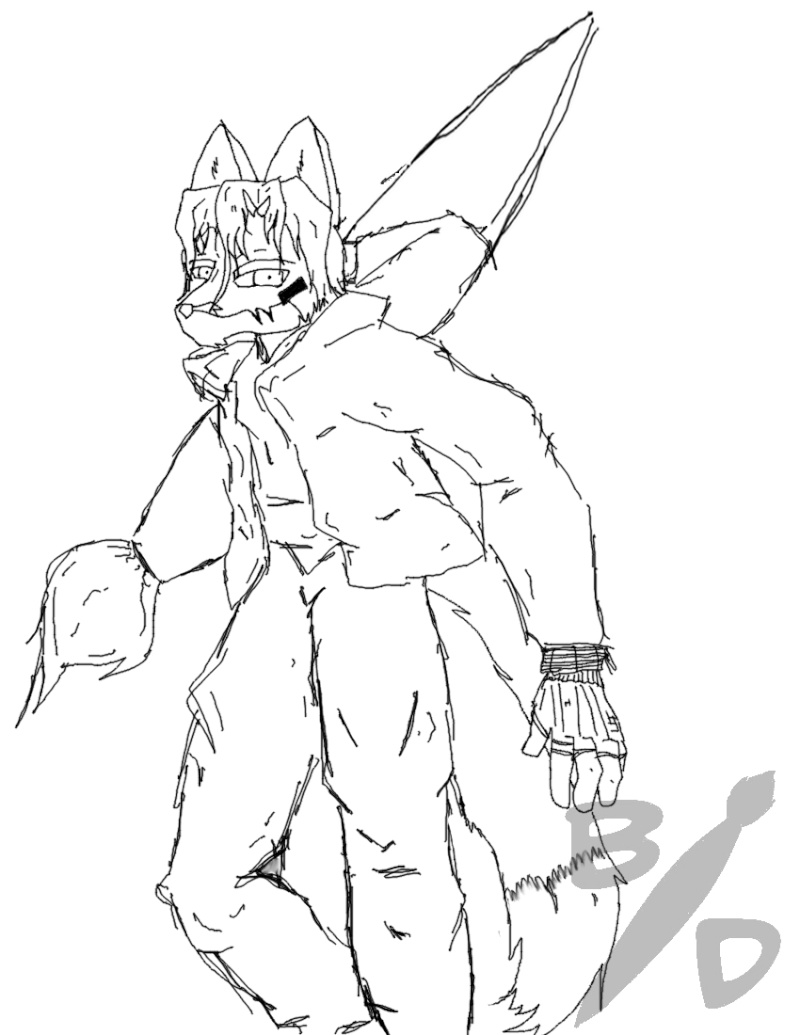 And @ the "no brilliant stuff here" guy... Thats not how you give some feedback dude... And not giving feedback= not helping at all.

Xenathos wrote:For a "messy" drawing this is even better then my "perfect" drawings XD

And @ the "no brilliant stuff here" guy... Thats not how you give some feedback dude... And not giving feedback= not helping at all.

26_994 voiced his opinion. If you're gonna post stuff, expect to get various response - be that feedback, opinion, troll-talk or hate-talk. 29_994 just gave an opinion - I hope true to his heart.

Sure, he could hold back on it, but then again - why should he? Of course, it would be nice if he'd tell what kind of brilliance is he expecting. I don't know 'bout how you feel, but his comment would make me think about my flaws rather than make me upset and force me to order him to shut up. I'd understand the fuss if it was a hatefull comment or troll comment, but 'twas just an opinion. Telling to shut up just shows that one cannot take opinion. And if you can't take a simple, blunt opinion then how can you imagine to take harsh critique?

I don't see a point in getting uptight about a guy who told what is on his wavelenght. Moreso, I have to say that I agree with him. There's nothing brilliant here. But I understand that BeDaOrLiSeAr is a young dude and he's developing in terms of drawing(in terms of teenage hormone storm too, I guess

). He posts lot's of stuff here, scratch quality, but he does draw a lot. I can tell that I saw some improvement from first post, but - truth to be told - not that big. When I was 13 or so I could change styles and the way I've drawn in months, although I couldn't see that until recently. And here - I don't see that much.

So, yes, I don't see anything brilliant here and if BeDaOrLiSeAr isn't an emo or a stuck up fellow, then he shouldn't take that as an offense. It's a statement, sure, on the negative side, but without any malice.

But, if a feedback is a must on this forum, then I believe that you should work with other stuff, i.ex. draw stuff that belongs to other - to grasp their style, look for some new ways of solving your problems, dealing with limitations. Sure, create your own stuff, but also draw by imitating works of others. You're young, you'll have tons of time to think about your characters. Meanwhile focus on improving by learning varieties of styles. Your own will surface one day, eventually. And as for chacters - write stories, novels, scripts. Improve on that field if you want to make comics - no matter if for your own enjoyment or for enjoyment of others. And if you want the latter - then you should definiately improve, because if you're gonna draw like the way you do now when you'll be 20, not many folks will care about it. And then, the heavy critique hammer will fall down hard. You still have some years to improve, if you really like it, and lot's of room for improvement.

Posts : 844
Join date : 2010-05-13
Age : 24
Location : Mississippi, U.S.A.
First of all, thank you Pietja for taking the time to write an intelligent and constructive comment on the situation. Overall, I do agree with you. I do not take any offense at all at 26_994's comment, I just wish it was a little more constructive. I agree that it would be better if he also said how I could improve and what he finds not very "brilliant about my artwork". Yes, I do want feedback, but I believe that feedback is not only just an opinion not backed up by further explanation. What I'm saying might be hypocritical (most hypocrites never notice their own faults in this field) so please forgive me if this is the case. Yes, I am a young guy who likes to draw a lot and is not particularly good at it. I know this fact and I embrace it as meaning I can only get better, better at doing something I enjoy enough that the opinions or sometimes deconstructive comments of others will not hinder my passion for it. I am not the kind of immature kid who thinks that the mind of a stranger over the internet can destroy or hurt me. When it comes to morale, I believe that it is all mental, and as a mental thing, it can only be injured by one's lack of maturity and ability to understand the world. I do what I do because it is fun, and as long as it remains so I will continue doing it. Allowing another to take the fun from an act that is only performed by one's self is stupid and weak to say the least.

Also, about the writing a story, I have been doing that for about a month on dA and I agree that it helps with character building.

One person's comment, a single comment that might not have been thought through, has caused two others that I have never met in person to come to my defense and for what they believe in (note that this is also their opinion about how one should treat others). This is an example of the danger of the internet. Intentions and reasons (and sarcasm) cannot be seen or sensed without proper explanation and can lead to events such as the last few comments. So often in this world one mistake, whether it is made a mistake by the beholder or the one committing the action, can lead to great consequences, but this is all just a result of the Fall (I understand that not everybody here is a Christian and does not need to feel obligated by me to believe the Fall), and must be accepted by mankind.

Overall, I am not mad at anyone here, say what you like, and thanks to all of you who defended me or said something constructive. None of us should hold anything against 26_994. 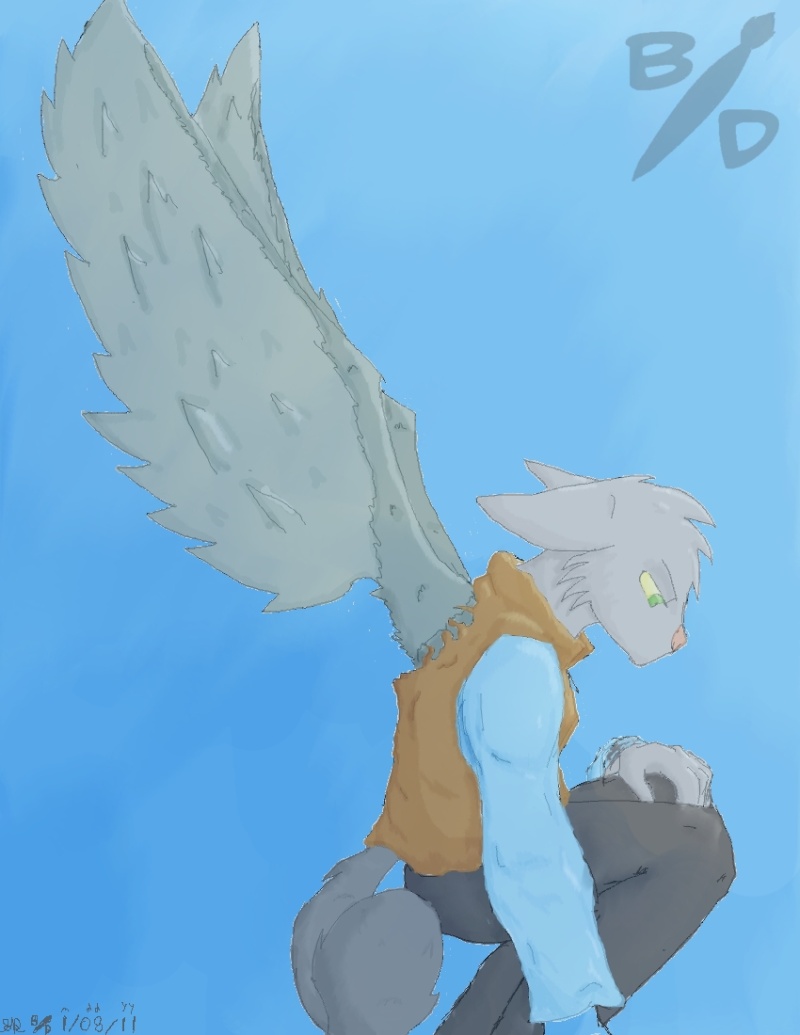 Posts : 844
Join date : 2010-05-13
Age : 24
Location : Mississippi, U.S.A.
A piece of crap that is actually part of one of my boarding school applications. Its not finished, so this piece of crap looks even crappier. Ah, well, when has that stopped me before (other than four years ago).

Thats supposed to be me, when I was eight, when I went to the camp Winona. It was a dark time. 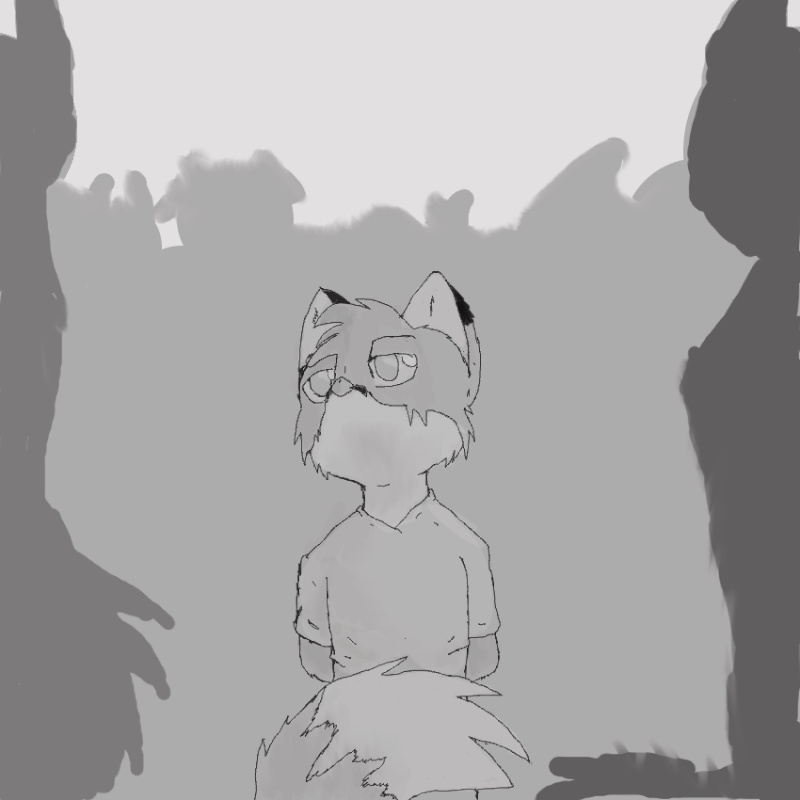 Posts : 844
Join date : 2010-05-13
Age : 24
Location : Mississippi, U.S.A.
Recently, I went back and looked at some of my old works (old as in 4-6 months old) and almost vomited on the keyboard. Theres so much that I didn't notice until now, and, in my opinion, compared to back then, I've improved a lot. I just know this will be the same situation I will be in in another few months. I saw that I used to draw huge freakin' heads, a long with some other mess ups, so I wonder what it'll be this time. Anyone notice anything in particular, besides just the whole thing being crap? I will accept any kind of feed back for this; I'll take a look at and keep an eye for anything you bring to my attention. I probably won't agree with you at first, but at least I know what to be watchful for. 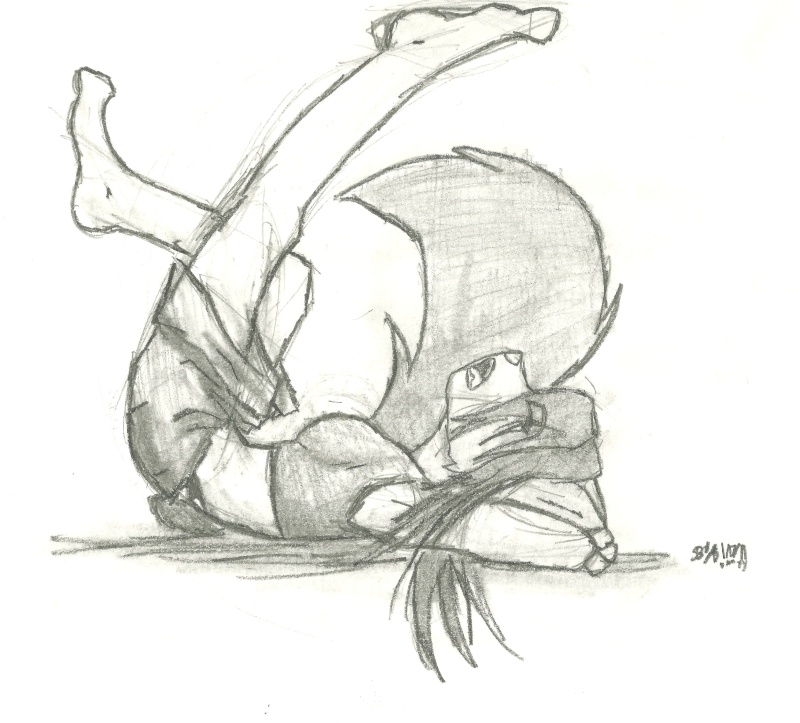 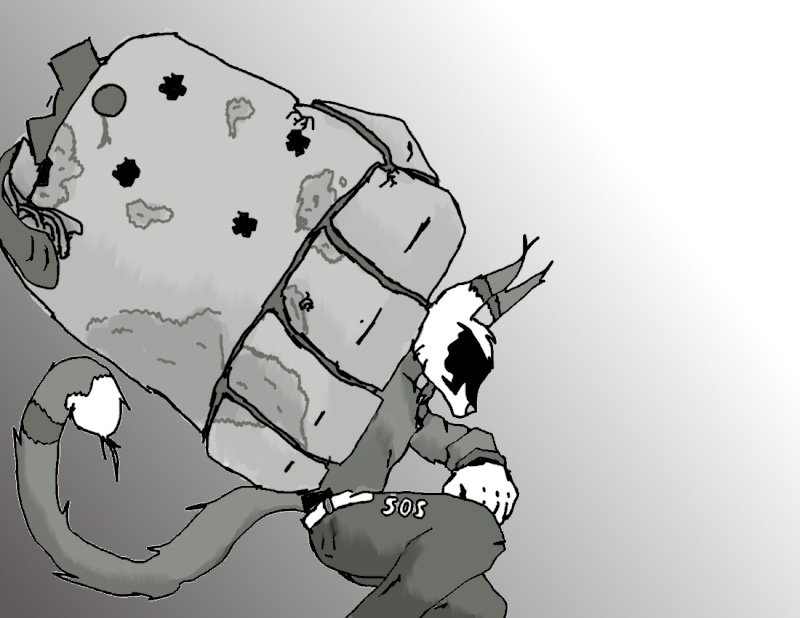 My crazy lizard (she is a Uramastyx, about 7 or more inches long, adorable and smart as possible) managed to move her cave across the tank, under the bowl (which she also moved) in under 2 hours. She never ceases to amaze me. 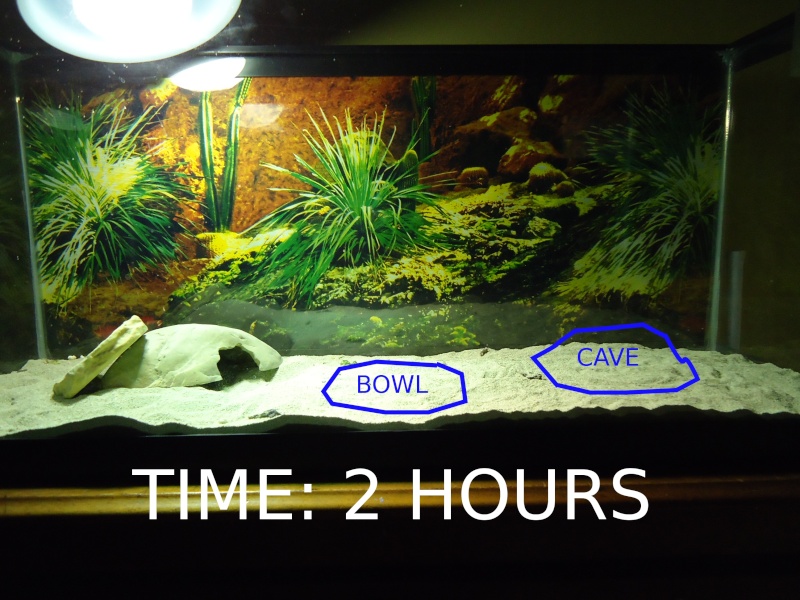