Posts : 2
Join date : 2009-11-04
Hard game, don't think you can contain infected in one area, the virus seems to jump to non infected or any dead civilians.

Game even slows down my computer and its a dual core one with 2 gb ram.
Need windowed version of it... and marines than can fire more than 1 bullet

The discussion is over JJ's new "time waster" (his words) that he mentioned on his main page back on October 27. It's available for free download from Lulu here: 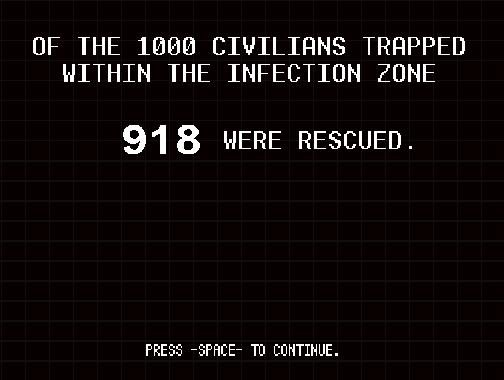 Spoiler:
Put down an evacuation point right away. Use whatever strategy you want, but try to put it far away from where the outbreak starts.

Next, scroll around to find the outbreak. Find it quick.

Got 'em? Good. Plant barriers on the zombies. If you're quick enough, you'll destroy all the zombies before there are any carriers or corpses to keep things going.

Simple, huh? Yeah, you've got to be lucky, too.

* Evacuation points cost you nothing, but you apparently can have only one active at any time. Keeping one on the board is important.
* ...But not as important as keeping carriers off your choppers. If you can't kill the outbreak immediately, put a Medical in place to treat everyone approaching your chopper. It'll do you more good in the long run than another Blockade.
* The Bio Tracker is neat, but really rather useless. While it's nice knowing who's a carrier and who isn't, it's more important to treat them before they board your chopper.
* Blockades not only (temporarily, until it's too badly damaged) keep Dots from passing, they also "kill" any you place them on -- except maybe one that's about to go "boom" and spread the infection. Use them to also smother small outbreaks from carriers who succumb and rise among others.
* Troops need a good field of fire, but if used effectively are even better than a barrier. Don't be afraid to shoot down a few Whites or Yellows to destroy an approaching Green, particularly if the Troops are defending a Medical and Evac zone. Just keep watch for those Reds rising.
* One problem with Troops is their limited angles of fire. They shoot along pre-determined directions, and at distance may not be able to target a Dot. They also seem to be allowed only one bullet on the screen at a time, so long-range sniping is slow at best.
* Don't be afraid to plant a second Evac point (with Medical coverage) if your first risks being overrun. Just watch out for other hazards, like active Greens.
* At some point, the game seems to speed up. Evacs don't stick around as long, Dots move faster, etc. It hasn't caused me any problems, but it's something to watch for.

My strategies:
* Place an Evacuation chopper near a corner of the field. (I prefer the lower right.)
* Hunt for the first Green and abort the infection if possible.
* If going into a long game, place a Medical to cover the Evac as soon as possible.
* Replace Evacs as soon as the old chopper takes off. The growing bar under it indicates how long before it lifts.
* Use Barriers to kill and contain Greens, slowing the spread. (It's possible Troops could wipe the infection out, but I consider this unlikely as you'd need to treat all the carriers/Yellows, too, and keep watch for Reds turning Green.)
* If the first Evac location becomes indefensible or can't access a large concentration, place a second Medical and Evac from there.
* When the number of unevacuated survivors drops below 100, be very cautious about getting them out. At that point the Greens are probably too widespread to defend against and there's no way I know of to get an Evac chopper to lift early.
* Watching the last Whites go can take time. As Funds do not affect the final score, consider using Barriers or Troops to off them.

I have successfully finished the game with 999 survivors ("Infection Eradicated"). I have also rescued over 700 Dots in the long game.

Admin
Posts : 478
Join date : 2009-11-03
One thing I failed to add to the instructions:
Hit 0 (zero) to kill off all remaining civilians.....doing so, however, will subtract the total number of remaining civilains from your final score.

I've also managed to contain and eradicate the infection without managing to kill of the first few Greens. Somehow they (and the carriers) were contained and eventually eliminated. I started amassing enough money that I put some Troops in the Greens' area and was gunning them down, but the last few were taken out by Blockades. About 958 survivors.

And I've found a use for the Bio Tracker -- if you're in a position to contain the infection, you need to trap the Yellows as well as the Greens.